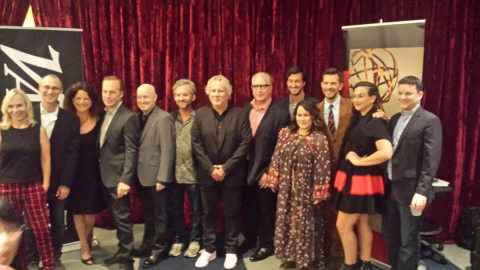 I love the Writers Guild events for many reasons. Sure, the writers tell great stories – behind the scenes from their shows and from when they first started out – and offer good advice. More on that in a sec.

The main reason these events are so awesome is that writers are treated like rock stars. Seriously. They get rushed when they enter the room, everyone wants a picture, and many get approached by someone with an audio recorder (remember when we called them tape recorders?), requesting an interview.

The evening started out with a reception for the panelists, their friends, Writers Guild peeps, and the press. Friends, strangers, lovers of TV united schmoozed, ate, and drank as they awaited the main event.

The path to Emmy-nominated writer – and actually a career in TV writing – was different for all with the exception of Alex Gregory & Peter Huyck (Veep), who knew each other since college, and got their big break together. They worked for David Letterman in New York before moving to LA for The Larry Sanders Show.

All big breaks are notable, but the one standout was from Sarah Shapiro, who worked for too many years in production on The Bachelor. She wrote UnREAL as a short film for catharsis. She wanted/needed to relieve the demons from her time molding on-camera impressions on the reality series. The film was picked up as a show, and she was connected with Marti Noxon. On their first meeting, Sarah went to Marti’s house, where they ate cookies, played with her dogs, and bonded. A partnership was formed.

When asked by an audience member what they did when they got stuck in the writers room, the common theme was keep writing. Get a writing partner and start with personal stories were suggested too. The majority of the panel were partnerships, it was just Bob, Alex Rubens (Key & Peele), and Carolyn Omine (The Simpsons) on the solo front.

Carolyn said that when you get stuck in the writers room, don’t talk to hear yourself speak. Make sure you have something of value to say. And, don;t worry, it’ll come.

Writing is hard, Marti said, and others nod. But we wouldn’t do it if it didn’t bring us joy.

Scott Alexander (The People v. O.J. Simpson: American Crime Story) shared how a few years ago they did an interview for a book on writing partnerships that was a ridiculously long process. Toward the end, the interviewer asked what they do when they get writers block. The response? We take a shower together. The book’s author did not note the sarcasm, and included it in the book.

This is just a sample of the stories shared at Thursday night’s event. It’s really amazing to watch a bunch of writers get together and swap stories. Seeing people from a variety of backgrounds pursuing their writing dreams truly makes anything seem possible.