Playwright Gabe McKinley’s Extinction is a darkly funny drama, starring James Roday (Psych) and Michael Weston (House), about male bonding and how relationships—and expectations—change throughout the years. The play is presented by Red Dog Squadron, and runs Fridays, Saturdays, and Sundays, through December 13 at Elephant Space, 6322 Santa Monica Blvd. in Hollywood.

McKinley’s other plays include The Kitchen Sink Play, Welcome Home Rock Rogers, and Floodplains. His short play The Grave was the winner of the Samuel French Off Off Broadway Short Play Festival and is published by Samuel French. McKinley speaks with Write On! about how he went from actor to playwright, the craft of writing plays, and more. Have you always wanted to write plays? What is it about the medium that appeals to you?
I started as an actor, and like many actors I found myself not being satisfied with many of the plays I was working on. I distinctly remember, while I was studying at NYU’s Classical Studio, I’d look at a play like Hamlet and think, “I can do better.” In all seriousness though, I found myself writing small plays and sketches for my actor friends and that led me away from acting and toward dramatic writing. I’m from a family of writers, so the switch was something that didn’t surprise those who knew me. As for play writing as a medium, it is unique from other forms, because it relies almost exclusively on the spoken word and the interaction between (hopefully!) emotionally and psychologically fully realized characters … the visual, while important, is secondary.

How did the idea for Extinction come about?
I decided I wanted to write a play about male friendships in transition. I had recently been to Atlantic City for a bachelor party, and I was fascinated by the way men act when away from prying eyes, so I decided to set the play in AC.

What was your writing process for it?
I wrote the initial draft of Extinction over the summer before my final year of grad school at The New School for Drama; it was my thesis play for my MFA. From that initial draft I worked on the play with the help of the wonderful playwright and teacher Christopher Shinn. The play has grown from a one-act to a full-length in the last six months.

How did Extinction come to Red Dog Squadron?
James Roday and Brad Raider, the artistic directors, are friends from our NYU days. James has always been supportive of my writing and was looking for a new play and asked if I had anything. I gave him Extinction. Always remember your friends.

What’s next?
I have a couple of plays ready for production. I am writing a film and developing a TV show. I am hoping to have a couple shows produced next year in New York.

How do you go about capturing the male experience so vividly and on target?
I think all good writing is honest writing. I just tried to put aside everything else and write one honest thing after another.

Plays are very dialogue and emotion intensive, what advice do you have for writing good dialogue?
Well, again, honesty is the key. An ear for dialogue is an elusive thing, but the advice I would give is to listen to everybody all the time … eavesdropping is part of the profession. Also, make sure your characters are listening to each other at all times.

Additional advice for writers?
I remember reading a John Guare quote about never getting a job … I love that advice, although in this economy it’s moot. I think that writing is a discipline and requires many sacrifices, both emotionally and social time wise. Writers write…. Today, Write On! speaks with Dallas Woodburn, the 22-year-old author of two collections of short stories and a forthcoming novel: The Identity Theft of Dani Dickinson. She has written more than 80 articles for national publications including Family Circle, Writer’s Digest, CO-ED, Justine, and The Los Angeles Times, and she writes a regular column for Listen magazine. Dallas got her start when she published her first book, There’s a Huge Pimple on My Nose, in 5th grade.

“I applied for and received a $50 grant from my elementary school to write, publish, and sell a collection of my short stories and poems.,” she says. “I proposed using the profits to repay my grant so the school could offer an extra one the following year. My first printing, done at a Kinko’s copy shop, was modest: 25 staple-bound 40-page books. Actually, they were more like thick pamphlets, but no matter—to me, they were the most beautiful books I had ever laid eyes upon.”

Pimple sold out in a couple of days and, after four 25-batch reprints at Kinko’s, she searched out a publishing company and ordered a few hundred glossy-covered, glue-bound copies.

“Pimple is proof that with a lot of hard work, a lot of perseverance—and, yes, a lot of support, too—a small idea can snowball into something bigger than you ever dreamed. … Pimple has sold more than 2,200 copies and I repaid two school grants. I have since published a second collection of stories, 3 a.m., and I recently signed with a literary agent to represent my first novel.” 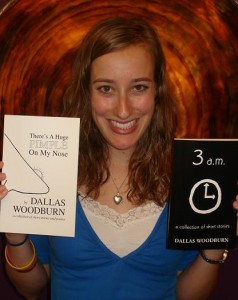 Where do your ideas come from?
Many of my ideas stem from my everyday life. One of my favorite things about being a writer is that even your most embarrassing moments in life are worth something because they are great writing material! My first article was for Justine magazine, at that time a newly established publication for teens, and it was a true-life account about how I was “sweet 16‚” and had never been kissed. The editors loved my honest voice and the piece resonated with a lot of readers. I have always tried to see my young age as an advantage in my writing, rather than a disadvantage, because it allows me to write about things like teen issues with a great deal of authenticity. As a teen writing for a teen publication, I wrote an article that I would want to read. I would encourage other writers to put themselves in this mindset—what insights and lessons does your particular background and experiences give you? How can you use these traits as an advantage in your writing life?

What is your creative process?
My fiction usually begins with a character. I am incredibly interested in people, and my favorite fiction is “character-driven.” Usually my characters start with a kernel of a personal experience or emotion that I am going through, and then pretty quickly this spins away from me and becomes a character separate from myself. Even if the eventual story is going to be written in third person, I usually like to write at least a couple pages in first person from the character’s perspective to get a sense of his or her voice. I don’t censor myself during this process—I just let the words flow freely and see what voice develops for the character.

How does article writing differ from short story writing? Are there certain processes you use for both types of writing?
I try to write every single day—I am most productive and happy when I have an established routine. Even if I don’t feel like writing, I tell myself to write for just 15 or 20 minutes, and usually by the end of that time I am in the groove and write for longer. My goal is to write 1,000 words every day. I am a night owl, so it is not unusual to find me at my computer writing after midnight, when the world is quiet and I am alone with my thoughts.

With fiction writing, I enjoy the discovery of the process—I usually only have a vague idea of where the story is going, and let the story unspool organically. With article writing, I have already conducted my research and interviews and gathered quotes before I even sit down to write the article, so the act of writing is more of a piecing together of material and organizing what I have into a compelling story. Once the first draft is done, editing is an important process as well, but my fiction generally goes through a much more involved and lengthy editing process than my articles do. With my novel, for example, the entire point of view changed from the first draft to the second draft. With article writing, editing is equally important, but the first draft tends to be much closer to the final draft because it is more organized and polished from the beginning.

Tell me about your novel …
It is entitled The Identity Theft of Dani Dickinson and is a young adult novel with some mystery, suspense, and a twist ending. I wanted to explore the gray area between truth and fiction, and the way writers tend to put bits of themselves into their writing. Through Dani’s journal writing you can see something is not right in her life and world, but she’s unwilling to talk about it directly. You find out more about her through the “fictional” stories she writes which are interspersed through the novel.

How important is it for kids to start writing at a young age?
So important! Studies show that keeping a journal and writing stories can help increase self-esteem and confidence, in addition to excitement about school and learning in general.

With my website www.writeonbooks.org I wanted to create a place where young writers can go to find resources and inspiration, as well as connect with other young writers. I started the site to coincide with my latest endeavor, which is starting a publishing company, Write On! Books, that publishes anthologies of stories, poems and essays written by young writers for young audiences. The goal is to give young people a much-needed outlet for expression and connection, while also hopefully inspiring a love of reading in youth.

Additional advice for writers?
Rejection is something that ever author has to deal with. As a writer, I joke that I could wallpaper all four of my bedroom walls with all the rejection letters I have received from editors! The important thing is not to take it personally. For whatever reason, you or your writing just wasn’t a right fit for that publication at this specific time. That doesn’t mean that they won’t love the next piece you send to them! When I get a rejection letter, I first read the comments to see if there is any advice I can glean or ways I can improve for next time. Then, I submit my story or essay or article somewhere else. It took me more than a year to find my literary agent. A year of rejection, rejection, rejection—until finally, I found my perfect match. My agent understands my writing and has faith in my career. I just had to have the patience and perseverance to find her!

What do you know now that you wish you knew when you first started writing?
Don’t worry about finding that one “perfect” story. Every basic story has already been told. What makes your stories unique is that you are the one telling them, and there has never before been another you.